It’s time to shake things up a little and introduce VSAN into the VMFocus.com lab.  So before we go any further a logical diagram of the configuration.

As menitioned in the VMFocus.com lab I have 3 x HP DL380 G6, each with the following specification:

You get a bit of a chicken and egg scenario with VSAN as you need to have vCenter available for your VSAN Cluster to be created.  My plan is to use the 2 x HP 72GB 15K SAS HDD in RAID 1 which will provide storage capacity and performance for Active Directory, vCenter and SQL before the VSAN cluster is formed.  They can also then be used to place ISO’s on in the future.

This is going to be a simple configuration as I’m limited to one disk group only having one SSD in each ESXi Host.

Again, this is going to be straight forward as it’s my home lab I want to have a mixture between capacity and performance, so I will use the default setting which is ‘number of failures to tolerate = 1’

This could be a blog post in itself! VSAN has a number of requirements which have to be met, these are:

With the above in mind and the constraints of my network being 1 GbE with 8 physical NIC’s I decided to go with a simple configuration using Load Based Teaming with resilience at the pNIC level (switch is a single point of failure) based on the following:

A picture speaks a thousand words, so the proposed network logical diagram is shown below. 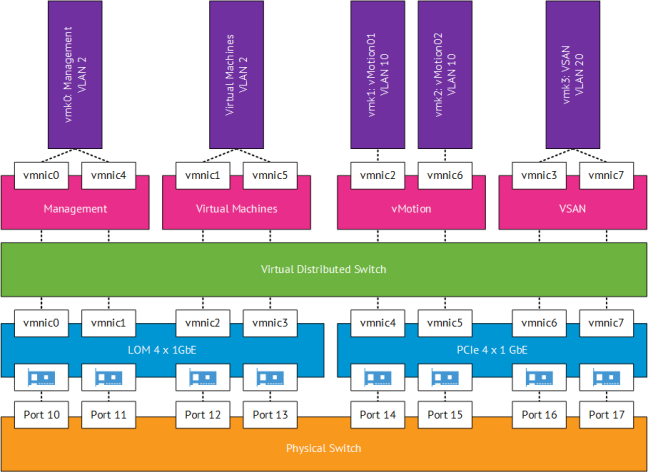