Two models are available which are:

These are marketed with the ability to provision virtual machines within 30 minutes.

What Does Provision Virtual Machines Within 30 Minutes Really Mean?

To answer this question you need to understand what HP have saved you from doing, which is:

So after completing the initial setup, you do have the ability to upload an ISO and start deploying an OS image.

What About The Stuff Which Marketing Don’t Mention? AKA Questions Answered?

At the time of this post, the latest supported versions are as follows:

HP have put together a slick product which automates the initial installation of ESXi and gives you a basic configuration of vCenter.  What it doesn’t give you is  design to say that your workloads are going to be suitable on the environment and or a solution that meets a client requirements.

I’m not sure exactly when, but HP changed the licensing portal from ‘Poetic’ to a new portal named ‘My HP Licensing Portal’.  All of the information looked exactly the same, however you could not rehost HP StoreVirtual Licenses.

The purpose of this blog post is to assist anyone who was in the same situation as me, scratching their head trying to figure it out!

You have an existing HP StoreVirtual license which ties the feature set to the first NIC MAC address on your StoreVirtual VSA.  You have changed, upgraded or redeployed your VSA and you need to rehost the license onto the new MAC address.

Browse to myhplicensing.hp.com and login for your email address and password that you use for your portal account.

Note: If you are not sure what email address is tied to your account login to HP Licensing for Software and select Administration > My Profile which will show your email address.

Once logged into My HP Licensing select Rehost Licenses 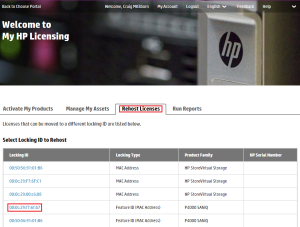 Select the tick box to confirm this is the license that you want rehosting and then click Rehost.

Select ‘Enter New Locking ID’ and enter the MAC Address of the first network adapter on your StoreVirtual.  Then click Next

The purpose of this blog post is to give you an insight into some of the quirky behaviour that I experienced during an upgrade of HP infrastructure, specifically in relation to HP StoreVitual 4500 and Virtual Connect.

Existing HP infrastructure exists across a campus which has recently been upgraded to redundant 10Gbps links.

The underlying hypervisor is vSphere 4.1 which is to be upgraded once the hardware is in situ.

The design was quite straight forward, to meet the customer requirements, we needed to:

A logical overview of the solution is shown below.

As part of the pre-requisite work the HP firmware had been upgraded as follows:

All new components had been upgraded to the same firmware and software levels.

The purpose of upgrade was to introduce/change the following items before vSphere was upgraded to 5.5 U1

On the new C7000 Chassis with HP BL460c Gen 8 Blades, Virtual Connect was used to logically separate bandwidth for four different networks with each containing traffic for a single subnet.  A VLAN tag was assigned to each subnet allowing ESXi 4.1 to be apply the VLAN headers.

After some troubleshooting we found that the issue was with Virtual Connect, if you define a network as a ‘single network’ with a VLAN tag assigned to it, Virtual Connect very kindly removes the VLAN header.

Resolution: Select Multiple Networks rather than a Single Network

The next issue we came across was Virtual Connect on the existing C7000 with HP BL460c G7 Blades.  Virtual Connect would accept the changes to Shared Uplink Set and Server Profiles so that we were now using ‘Multiple Networks’ with VLAN tag’s however we couldn’t ping the default gateway on the HP5820 from the ESXi DCUI.

Again, after some troubleshooting we discovered that Virtual Connect allows you to make changes to existing networks from ‘Single’ to ‘Multiple Networks’ with the HP BL460c G7 Blades running, but these changes don’t take effect until after a reboot.

When you upgrade the HP P4500 to 10GbE you add an additional 4GB RAM and the 10GbE card, fairly straight forward.  After the hardware installation we wanted to utilise the network cards as follows:

To do this we need to break the existing Adaptive Load Balance bond on the 1GbE connections.  After breaking the bond we had no link lights on the HP5820 or P4500.  We started to scratch our heads and jumped on the KVM to see what had happened.  We soon discovered that when the bond is broken, the network interfaces are placed into ‘disabled’ state.

Next we placed an IP Address on the 1GbE interface so that we could continue to manage the array.  We enabled flow control on the 10GbE interfaces and also jumbo frames as this was part of the design and then finally created the ALB bond with the 10GbE interfaces having the default gateway applied to them.  We ran some simple ping tests to the Management IP Address which resulted in a ping response, however the 10GbE would not respond.  Not exactly where we wanted to be!

We found the resolution by mistake.  On one of the nodes we performed a shutdown then power on rather than a restart, flow control was enabled.  It appears that it is only on the power on operation the P4500 negotiate flow control settings with the upstream switch.

Resolution: After enabling flow control, shutdown and power on P4500

It’s no secret that I’m a fan of the StoreVirtual, which you can see by the number of blog posts I have made about the subject.

HP have announced the next iteration of LeftHand OS, which is version 11.0, this has a number of enhancements which are covered by Kate Davis (@KateAtHP).  These include:

What I’m most excited about is the new Adaptive Optimization feature which is introduced in LeftHand OS 11.0 .  Last night Calvin Zito (@HPStorageGuy) hosted a live podcast covering AO in more depth.  So without further a due:

During the podcast I asked a number of questions, one of which is the potential to use HP StoreVirtual VSA with HP IO Accelerator cards, with C7000 blades and local storage for VDI deployments.  The StoreVirtual representative (who was at LeftHand networks before HP acquired them) mentioned this is the one of the primary use cases for AO and they are going to be performing some benchmarks.

We also spoke about performance, the StoreVirtual representative explained about all the lab tests they had performaned and to get StoreVirtual working at it’s correct capacity you should try and keep the number of nodes per management group to 32 and have a maximum of 16 clusters.

So you have put together an epic vSphere Metro Storage Cluster using your HP StoreVirtual SAN (formerly Lefthand) using the following rules:

In this example we have a Management Group called SSDMG01 which contains:

StoreVirtual uses a ‘Virtual IP’ Address to ensure fault tolerance for iSCSI access, you can view this under your Cluster then iSCSI within the Centralized Management Console.  In my case it’s 10.37.10.2

Even though iSCSI connections are made via the Virtual IP Address, each Volume goes via a ‘Gateway Connection’ which is essentially just one of the StoreVirtual Nodes.  To check which gateway your ESXi Hosts are using to access the volumes, select your volume and then choose iSCSI Sessions.

In my case the ESXi Hosts are using SSDVSA01 to access the volume SSDVOL01 which is correct as they are at Site 1.

Let’s quickly introduce a secondary a second Volume called SSDVOL02 and we want this to be in Site 1 as well.  Let’s take a look at the iSCSI sessions for SSDVOL02

Crap, they are going via SSDVSA02 which is at the other site, causing latency issues.  Can I do anything about this in the CMC? Not that I can find.

HP StoreVirtual is actually very clever, what it has done is load balance the iSCSI connections for the volumes across both nodes in case of a node failure.  In this case SSDVOL01 via SSDVSA01 and SSDVOL02 via SSDVSA02.  If you have ever experienced a StoreVirtual node failure you know that it takes around 5 seconds for the iSCSI sessions to be remapped, leaving your VM’s without access to there HDD for this time.

What can you do about this? Well when creating your volumes make sure you do them in the order for site affinity to the ESXi Hosts, we know that the HP StoreVirtual just round robins the Gateway Connection.

That’s all very well and good, what happens when I have a site failure, let’s go over this now.  I’m going to pull the power from SSDVSA01 which is the Gateway Connection for SSDVOL01.  It actually has a number of VM’s running on it.

Man down! As you can see we have a critical event against SSDVSA01 and the volume SSDVOL01 status is ‘data protection degraded.

Let’s take a quick look at the iSCSI sessions for SSDVOL01, they should be using the Gateway Connection SSDVSA02

Yep all good, it’s what we expected.  Now let’s power SSDVSA01 back up again and see what happens.  You will notice that the HP StoreVirtual re syncs the volume between the Nodes and then it’s shown as Status: Normal.

Here’s the gotcha, the iSCSI sessions will continue to use SSDVSA02 in Site 2 even though SSDVSA01 is back online at Site 1.

After around five minutes StoreVirtual will automatically rebalance the iSCSI Gateway Connections.  Great you say, ah but we have a gotcha.  As SSDVOL02 has now been online the longest, StoreVirtual will use SSDVSA01 as the gateway connection meaning we are going across the intersite link.  So to surmise our current situation:

Not really the position we want to be in!

We can get down and dirty using the CLIQ to manually rebalance the SSDVOL01 onto SSDVSA01 perhaps? Let’s give it a whirl shall we.

Login to your VIP address using SSH but with the Port 16022 and enter your credentials.

If your quick and flick over to the CMC you will see the Gateway Connection status as ‘failed’ this is correct don’t panic.

The only way to resolve this is to either Storage vMotion your VM’s onto a volume with enough capacity at the correct site or reboot your StoreVirtual Node in Site 2.

Hopefully, HP might fix this with the release of LeftHand OS10.1