In part two we installed and configured HP StoreVirtual VSA on vSphere 5.1 in this blog post we are going to look at automating failover.

I think a quick recap is in order.  If you remember we received a warning when adding SATAVSA01 and SATAVSA02 to the Management Group SATAMG01.  Which was:

‘to continue without installing a FOM, select the checkbox below acknowledging that a FOM is required to provide the highest level of data availability for a 2 storage system management group configuration. Then click next’.

This error message is about quorum, a term that I’m sure alot of you are familiar with when working with Windows clusters.  Each VSA run’s whats known as a ‘manager’ which is really a vote.  When we have two VSA’s we have two votes, which is a tie.  Let’s say that one VSA has an issue and goes down, how does the the remaining VSA know that? Well it doesn’t.  It could be that both VSA’s are up and they have lost’s the network between them.  This then result’s in split brain scenario.

This is where the Failover Manager comes into play.  So what exactly is a Failover Manager? Well it’s specialized version of the SAN/iQ software which runs under ESXi, VMware Player or the elephant in the room (Hyper V).  It’s purpose in life is to be a ‘manager’ and maintain quorum by introducing a third vote ensuring access to volumes in the event of a StoreVirtual VSA failure.  The Failover Manager is downloaded as an OVF and the good news is we already have a copy which we have extracted.

A few things to note about the Failover Manager.

In this environment we will be installing the Failover Manager on the local storage of ESXi02 and placing it into a third logical subnet.  I think a diagram and a reminder of the subnets are in order.

Right then, let’s crack on shall we.

We are going to deploy SATAFOM onto ESXi02 local hard drive which is called ESXi02HDD (I should get an award for my naming conventions).

The Failover Manager or FOM from now on, is an OVF so we need to deploy it from vSphere Client.  To do this click File > Deploy OVF Template.

Browse to the location of your extracted HP StoreVirtual VSA files ending in FOM_OVF_9.5.00.1215FOM.ovf 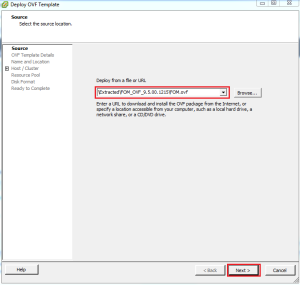 Click Next on the OVF Template Details screen and Accept the EULA followed by Next.  Give the OVF a Name in this case SATAFOM and click Next.  When you get to the storage section you need to select the local storage on a ESXi Host which is NOT running your StoreVirtual VSA.  In this case it is ESXi02HDD 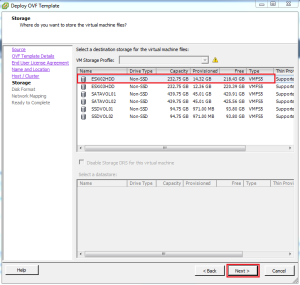 TOP TIP, don’t worry if you cannot select the correct network mapping during deployment. Edit the VM settings and change it manually before powering it on.

If all is going well you should see a ‘Deploying SATAFOM′ pop up box.

Whilst the FOM is deploying let’s talk networking for a minute.

On ESXi02, I have a subnet called FOM which is on VLAN 40.  We are going to pop the vNIC;s of SATAFOM into this.  The HP v1910 24G is the layer three default gateway between all the subnets and is configured with VLAN Access Lists to allow the traffic to pass (I will do a VLAN Access List blog in the future!) 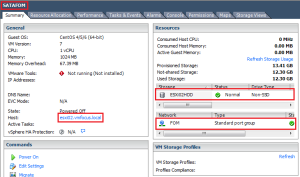 Awesome let’s power the badboy on.

We need to use use the same procedure we used to set the IP address’s on the FOM as we did on the VSA.  Hopefully you should be cool with this, but if you need a helping hand refer back to How To Install & Configure HP StoreVirtual VSA On vSphere 5.1

The IP address’s I’m using are:

Time to fire up the HP Centralized Management Console (CMC) and add the IP Address into  Find Systems.

Log into view SATAFOM and it should appear as follows.

Crap, Craig that didn’t work, I got a popup about a Virtual Manager. What’s that all about?

Nows a good time as any to talk about two other ways to failover the StoreVirtual VSA.

Virtual Manager this is automatically added to a Management Group that contains an even number of StoreVirtual VSA’s.  If in the event you have a VSA failure you can start the Virtual Manager manually on the VSA which is working.  Does it work? Yes like a treat but you will have downtime until the Virtual Manager is started and you nerd to also stop it manually when the failed VSA is returned to action.  Would I use it? If you know your networking ‘onions’ you should be able configure the FOM in a third logical site to avoid this scenario.

Primary Site in a two manager configuration you can designate one manager (StoreVirtual VSA) as the Primary Site.  So if the secondary VSA goes offline you maintain quorum.  The question is why would you do this? Honestly I don’t know, because unless you have some proper ninja skills, how do you know which VSA is going to fail? Also you need to manually recover quorum, which isn’t for the feint heated.  My recommendation, simples, avoid.

Let’s try adding the SATAFOM back into Management Group SATAMG01.  Voila it works!  You might get a registration is required notice, we can ignore that as I’m assuming you have licensed your StoreVirtual VSA.

(I know I have some emails, they are to do with feature registration and Email settings)

Throughout this configuration we have used the following logic:

In my lab I have a VM called VMF-DC01 which you guessed it is my Domain Controller, it resides on SATAVOL02.

We are going to power off SATAVSA01 which will mimic it completely failing, no shutdown guest for us!  Fingers crossed we should still maintain access to VMF-DC01.

Crap we lost connection for about 10 seconds to VMF-DC01 and then it returned whys that Craig you ask?

So when we powered off SATAVSA01 all the iSCSI connections had to be ceased and then represented back via the VIP to SATAVSA02.

To prove this, let’s power on SATAVSA01 and wait for quorum to be recovered.  OK let’s power off SATAVSA02 this time and see what happens.

I was browsing through folders and received a momentary pause of about one second which to be fair on a home lab environment is pretty fantastic.

So what have we learned? We can have Network RAID  1 with Hardware RAID 0 and make our infrastructure fully resilient.  To sum up, I refer back to my opening statement which was the HP StoreVirtual VSA is sheer awesomeness!